Latest
Joe Biden’s Reckless Behavior Has Created This Huge...
Tucker Carlson Exposed A Horrifying Way Vaccine Companies...
Top Republican Just Exposed How Democrats Are Covering...
A Key Player In the Democrats’ Attacks Against...
Dr. Fauci Was Working On This Huge Secret...
Devin Nunes Said Nine Words That Laid Bare...
This Voting Machine’s Irregularities Were Major Enough To...
A Top Official Dropped A Bombshell How Democrats...
This One Document Shows Just How Much Joe...
A Democrat Proposed A Wild Conspiracy Theory To...
Home Featured A Shocking Event Not Seen In 100 Years Just Stunned Kevin McCarthy
FeaturedGovernmentPoliticsU.S. News 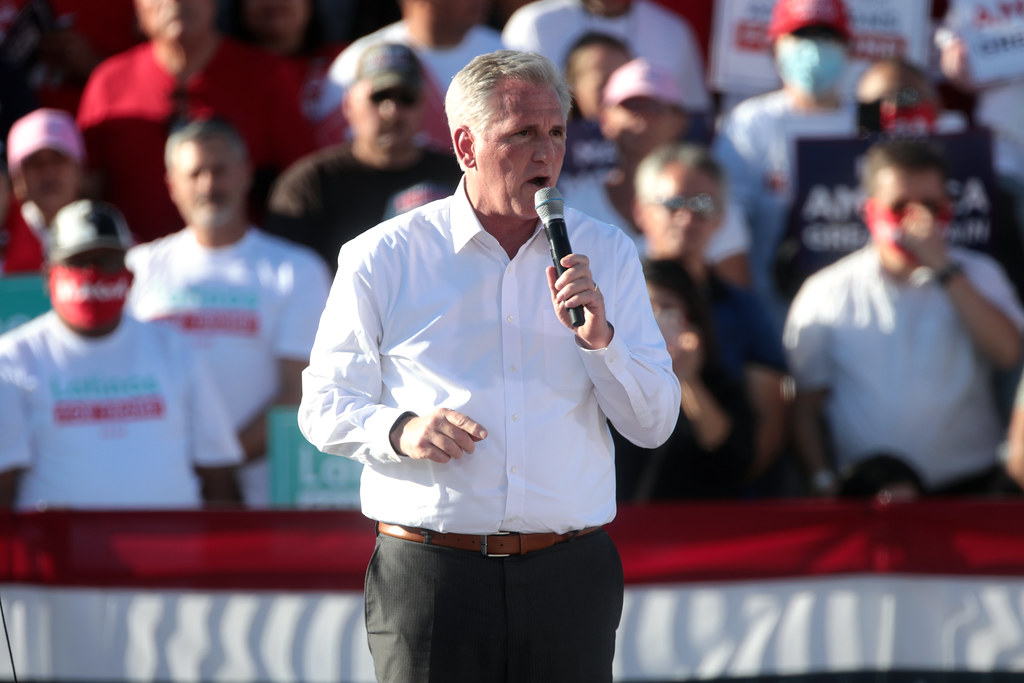 "Kevin McCarthy" by Gage Skidmore is licensed under CC BY-SA 2.0.

Republican leadership finds itself in a precarious position that no one could have predicted.

In fact, this shocking event has not been seen in 100 years.

And Rep. Kevin McCarthy is stunned more than anyone.

The last time a vote for Speaker went to multiple ballots was in 1923 – exactly one hundred years ago – when Republicans refused to reelect Representative Frederick Huntington Gillett.

It took nine ballots for Gillett to get the votes needed to secure the speakership.

But the longest showdown for Speaker was in 1855 and lasted two full months with 133 rounds of votes before a victor emerged.

In the first two rounds of voting for Speaker on Tuesday, 19 Republicans voted for members than McCarthy with Rep. Jim Jordan (R-OH) winning both the second and third round despite not wanting the position and giving his own endorsement to McCarthy.

On Wednesday, 20 Republicans voted for Rep. Byron Donalds (R-FL) on both the fourth, fifth and sixth ballots.

Former President Donald Trump put out a statement calling on all Republicans to vote for McCarthy.

“Some really good conversations took place last night and it’s now time for all of our GREAT Republican House Members to VOTE FOR KEVIN, CLOSE THE DEAL, TAKE THE VICTORY & WATCH CRAZY NANCY PELOSI FLY BACK HOME TO A VERY BROKEN CALIFORNIA, THE ONLY SPEAKER IN U.S. HISTORY TO HAVE LOST THE ‘HOUSE’ TWICE!”

“REPUBLICANS, DO NOT TURN A GREAT TRIUMPH INTO A GIANT & EMBARRASSING DEFEAT. IT’S TIME TO CELEBRATE, YOU DESERVE IT.”

“Kevin McCarthy will do a good job, and maybe even a GREAT JOB – JUST WATCH!” Trump concluded.

Appearing on MSNBC Tuesday night, Rep. Alexandra Ocasio-Cortez (D-NY) was sure to put her two cents in on the situation.

“I do not believe that Kevin McCarthy has the votes. I believe that a lot of the opposition to him is very personal. I believe his leadership style is incompatible with a lot of Republican members and certainly the Democratic Caucus,” she said.

“So the question is, is there anyone in their caucus that can build that consensus? If there isn’t, McCarthy’s team may have to come to the Democratic Party? And, if that’s the case, then what would that even look like. It’s rather unprecedented? Could it result in a potential coalition government?”

But on Wednesday speaking to the Daily Beast, Rep. Ocasio-Cortez (D-NY) put out the idea of a “unifying” candidate saying she “wouldn’t outright rule out” working with Republicans to resolve the speaker battle, but that “McCarthy would not be a unity candidate” and Democrats “would need more concessions than just things like committee ratios.”