Latest
The Real Reason the January 6 Committee Canceled...
Sources Say Joe Biden Ordered the Destruction of...
Joe Biden Has a Plan to Regulate Cryptocurrency...
Joe Biden Just Said the One Thing That...
This Shocking New Hunter Biden Revelation has Democrats...
Joe Biden is Stepping Up Efforts to Purge...
More 2020 Voter Fraud – Election Official Charged...
Mitt Romney Proved He’s a Tool of the...
Ford Slammed the Brakes on the Deep State’s...
Even the Deep State is Going Bananas Over...
Home Featured The New York Times Just Ran a Piece that Gave Joe Biden Something to Smile About
FeaturedGovernmentPoliticsU.S. News 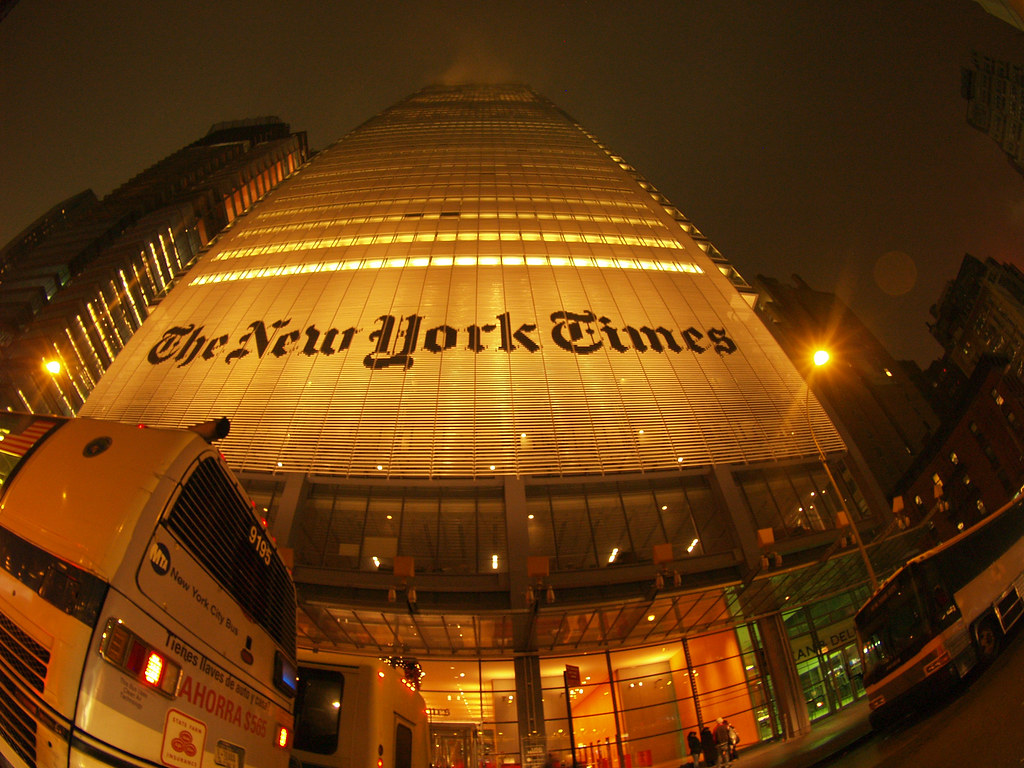 "New York Times Building, NYC" by alextorrenegra is licensed under CC BY 2.0.

The Democrats are desperate to shred the Constitution to achieve their socialist goals.

And Joe Biden is their leader in the effort.

Now the New York Times just ran a piece that gave Joe Biden something to smile about.

The New York Times claims to be “defenders of democracy.”

But the truth is, if the liberal media have their way, they will aid in the destruction of our great republic and they will do it right out in the open.

Because one of the things they either purposefully fail to ever explain, or don’t even understand, is that the United States is not, and has never been, a democracy.

The United States, as established by our Founders and set up in our Constitution, is a Constitutional Republic.

It was designed that way on purpose, to assure that we do not devolve into mob rule – which is at its essence what democracy is.

So, it doesn’t come as a real surprise to us here at Deep State Watch that the New York Times decided to run an op-ed calling for the Constitution to be entirely scrapped.

According to the op-ed from two Ivy League law professors, the “broken” and “famously undemocratic” U.S. Constitution “stands in the way” of “real” freedom and democracy.

The op-ed calls for the U.S. to “radically alter the basic rules of the game” by no longer requiring us to “justify our politics by the Constitution.”

The op-ed, titled “The Constitution Is Broken and Should Not Be Reclaimed,” was penned by law professors Ryan D. Doerfler of Harvard and Samuel Moyn of Yale, and makes the claim that when liberals “lose in the Supreme Court” they mistakenly blame the Justices for misinterpreting the Constitution, but the reality is “struggling over the Constitution has proved a dead end.”

“The real need is not to reclaim the Constitution, as many would have it, but instead to reclaim America from constitutionalism,” the authors assert, as they attack the “some centuries-old text.”

The op-ed also bizarrely claims that all constitutions, and “especially the broken one we have now,” “aids the right.”

Even stranger, the op-ed goes on to claim that while liberals have attempted to “reclaim” the Constitution for half a century, they have “agonizingly little to show for it” while calling to “radically alter the basic rules of the game.”

At a time when the radical left is winning on almost every front and making gains at a faster pace than at any time in recent memory, the authors claim the left is losing.

Of course, the New York Times is no stranger to running lies and outrageous claims.

And trashing the U.S. Constitution is now part of their agenda for bringing down the American Republic.

The authors flatly call for Congress to “openly defy” the Constitution in order to “get to a more democratic order.”

And they aren’t the only ones.

Last month, a Rasmussen Reports survey revealed that most Democrats believe the U.S. Constitution is fundamentally “racist” and “sexist.”

Radical leftist Georgetown University Law School professor Rosa Brooks said Americans were “slaves” to the U.S. Constitution – a document that was written by “a tiny group of white slave-owning men.”

Leftist MSNBC panelist and The Nation‘s justice correspondent Elie Mystal called the Constitution “trash” written by the “captains of the slaving industry.”

And of course, in May, President Joe Biden, while pushing for more gun control, told reporters that “the Constitution, the Second Amendment was never absolute.”

So, the New York Times is really just sticking to the Democrat game plan by calling for the end to the Constitution.

It’s all part of the socialist plan to bring about the destruction of the greatest and freest nation the world has ever known.

These Republicans Just Blew the Lid Off This Shocking Treasonous Act