Donald Trump’s Space Force Has a New Unit to Track These Threats to the U.S. 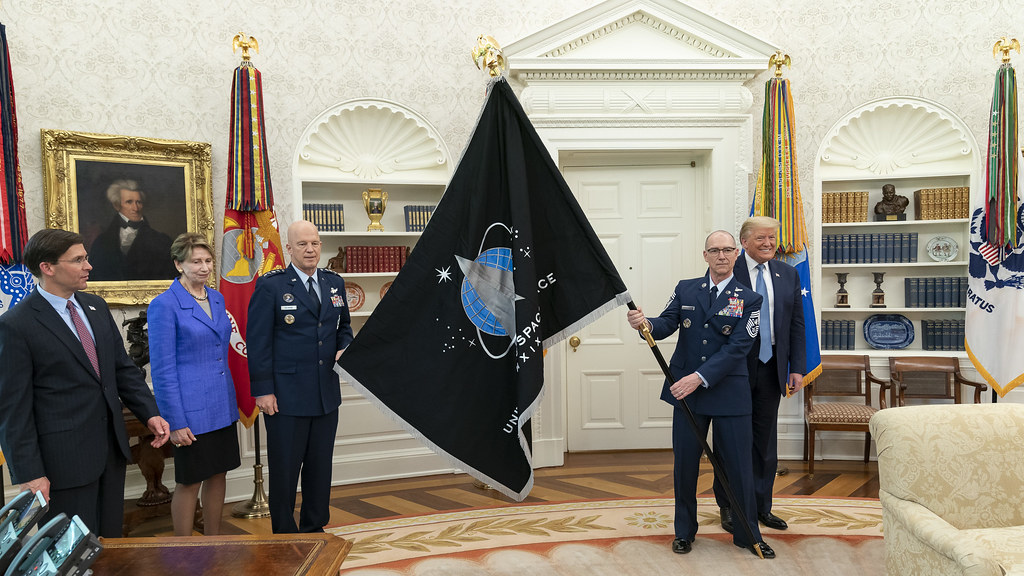 "Presentation of the U.S. Space Force Flag" by The White House is marked with Public Domain Mark 1.0.

At first everybody laughed.

But then it turned out he was right again.

And now Donald Trump’s Space Force has a new unit to track these threats to the U.S.

When it was first announced, the U.S. Space Force was immediate fodder for late night talk show hosts and social media memes.

Even many Trump supporters laughed about the idea of a Star Trek-like military force out in outer space.

There were even contests on who could create the best design for the Space Force uniforms.

But now the U.S. Space Force is moving forward in its mission to protect the United States from threats in an effort called ‘Space Delta 18.’

Part of Space Operations Command, it will be the Space Force’s spy agency known as the National Space Intelligence Center.

The new unit will be tasked with providing “critical intelligence on threat systems, foreign intentions and activities in the space domain,” and will identify all threats to the United States’ space assets no matter where they originate, kinetic or not.

“‘Kinetic’ in this sense refers to threats that can physically damage or degrade U.S. satellites and other assets, while ‘non-kinetic’ generally refers to anti-satellite weapons that use directed energy, signal jamming or other means to disrupt a satellite’s operations.

Delta 18 will operate the National Space Intelligence Center (NSIC), a new intelligence hub based out of Wright-Patterson Air

Force Base in Ohio. Space Delta 18 will eventually be staffed by 345 civilian and military personnel, military officials said.

The need for such a unit tasked with collecting intelligence on space threats has been underscored in recent years as the anti-satellite capabilities of China and Russia have evolved. A Chinese satellite was recently observed to have dragged a defunct navigation satellite into a ‘graveyard orbit,’ for example, while Russia has conducted highly destructive anti-satellite tests that have created hazardous orbital debris fields.”

Russia has also been jamming GPS signals in its invasion of Ukraine by targeting the United States’ Navstar system of satellites.

So it turns out Donald Trump was once again correct when he predicted space was going to become a warfighting domain.

It’s exactly what has happened.

And now that there have been increased sightings of UFOs and the military threats posed by them, the need for military presence in space may be even more important.