Latest
Joe Biden’s Reckless Behavior Has Created This Huge...
Tucker Carlson Exposed A Horrifying Way Vaccine Companies...
Top Republican Just Exposed How Democrats Are Covering...
A Key Player In the Democrats’ Attacks Against...
Dr. Fauci Was Working On This Huge Secret...
Devin Nunes Said Nine Words That Laid Bare...
This Voting Machine’s Irregularities Were Major Enough To...
A Top Official Dropped A Bombshell How Democrats...
This One Document Shows Just How Much Joe...
A Democrat Proposed A Wild Conspiracy Theory To...
Home U.S. NewsGovernment Andrew McCabe’s Confession Of One Crime Against Trump Just Blew Up In His Face
Government 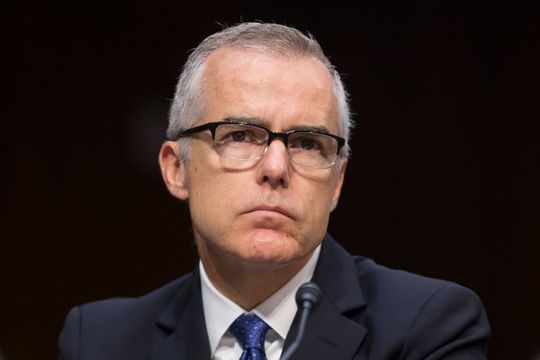 Former Deputy Director Andrew McCabe is out for revenge.

But the Deep State operative’s media tour blew up in his face.

That’s because McCabe let the cat out of the bag on the FBI’s worst anti-Trump plot.

Andrew McCabe set off a political earthquake across America with a 60 Minutes interview with CBS’s Scott Pelley.

McCabe told Pelley that there “were meetings at the Justice Department at which it was discussed whether the vice president and a majority of the Cabinet could be brought together to remove the president of the United States under the 25th Amendment.”

They could not believe McCabe admitted to using his position as the acting Director of the national police force to convene a secret meeting to depose the President of the United States.

Not everyone was amused.

President Trump ripped McCabe for engaging in an act of treason.

Wow, so many lies by now disgraced acting FBI Director Andrew McCabe. He was fired for lying, and now his story gets even more deranged. He and Rod Rosenstein, who was hired by Jeff Sessions (another beauty), look like they were planning a very illegal act, and got caught…..

….There is a lot of explaining to do to the millions of people who had just elected a president who they really like and who has done a great job for them with the Military, Vets, Economy and so much more. This was the illegal and treasonous “insurance policy” in full action!

Graham threatened to subpoena McCabe to explain his seditious actions.

“We’re going to find out what happened here and the only way I know to find out is to call the people in under oath and find out, through questioning, who’s telling the truth because the underlying accusation is beyond stunning,” Graham declared in an interview Sunday on CBS News’ “Face the Nation.”

Fake news “reporters” often blab that pointing out the FBI turned into a rogue secret police force scheming to overthrow the legitimately elected President of the United States is “attacking the very fabric of our democratic institutions.”

But nothing could be further from the truth.

Even a spy state apologist like Graham knows this is false.

McCabe quickly realized he was in over his head.

It’s one thing to hurl charges on a television interview.

Being hauled before Congress is a completely different story.

McCabe does not want to answer questions about the FBI using spies to infiltrate the Trump campaign or abusing the FISA courts to get warrants to eavesdrop on Carter Page.

So McCabe quickly backtracked on comments about a possible coup.

McCabe hoped walking back his story about a secret plot to overthrow the President would head off a Congressional subpoena.